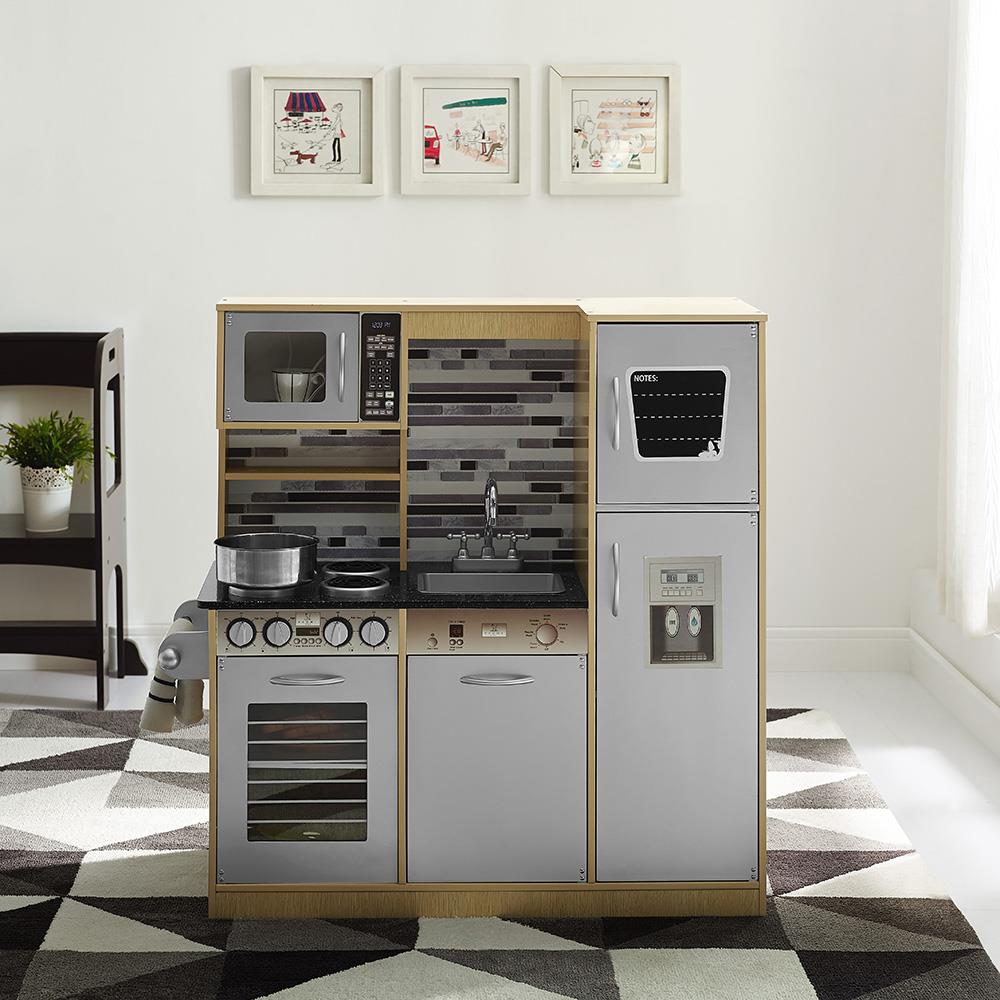 Kids don’t listen. They imitate. Early development in children including inculcation of many habits, ideas and development skills are a direct result of kids imitating their parents.  This is why Pretend Play toys are popular among kids and parents alike and they function as a fun toy in the developmental stages of a child. Preterm Play toys enhance kids’ creativity, responsibility and also develop their motor skills, pattern recognition skills and so on.

Kids learn a lot during their play time and the toys they play with in their childhood shape up their growth. They experiment and explore a lot of things during their playtime. A play kitchen set is not merely a toy for a kid to play with. It can play a great role in the development of a child. It encourages the kid to be a great thinker.

Playing with toy kitchen sets can be very exciting for kids. It would make them more imaginative which would in turn enhance their creativity levels. Kids can have a lot of fun creating their own unique recipes. They would create unique kitchen scenarios while playing around with toy utensils and appliances.

Any toy involving role play makes a kid express himself or herself. A play kitchen set is a perfect toy for role play which develops the communication skills of the kid. The kid would be vocally very active while playing with the pretend play kitchen set. The kid’s vocabulary would also improve in a great way as he/she learns about new things. It would help the kid understand the importance of proper communication particularly if he/she plays with other kids.

Teaches the Importance of teamwork

A play kitchen set is a toy which is meant to be played with other kids. This encourages teamwork among the kids and helps in the social development of all the kids involved. The nature of the toy is such that it would encourage the kids to discuss among themselves during the playtime and take decisions together. When they discuss, they would learn to be patient, tolerant and listen to the opinions of others. The kids would learn how to work together as a team and get things done faster. They would learn the importance of cooperation.

Working in the kitchen is all about being organized. If you want to be able to cook efficiently and quickly, all of the utensils and food items should be organized in the kitchen racks properly. To be able to cook efficiently for the whole family, everything needs to be planned beforehand. Otherwise, things would become very messy and the whole cooking process would take a lot of time. By playing with a pretend play kitchen set, kids would learn how to be organized. They would understand the importance of planning which would be of great help to them when they become adults. The kitchen set has several functions/appliances in  the kitchen like microwave, Convention Oven, refrigerator, dishwasher etc. Working with all of these improve organizational skills of the kids.

Improves the Motor Skills of Kids

As kids play with the kitchen set, they would do a lot of physical activity such as picking up forks, spoons etc. They would be busy organizing utensils in the cupboards. They would be operating the appliances that come with the kitchen set. All of these activities would help them improve their motor skills. This is a vital part of their growth and development. The toy kitchen set has several actual moving components like doors, handles, stove knobs and dishwasher trays.

Children break things at home. Even though a lot of them don’t do it intentionally, they don’t really care about things getting broken at home because of their actions. They wouldn’t really know the value of money. A play kitchen set would be really helpful in teaching them the value of money and being responsible at home. A gourmet play kitchen set is a slightly expensive toy and a kid who has it would value it a lot. They would be very careful while handling it.

As kids play with a toy kitchen set, they learn to identify different food items and important utensils used in the kitchen. It will help you teach them about healthy food items such as fruits, vegetables. eggs etc., and avoid junk food. This in turn would help them as they grow up. They would choose healthier food options and learn to lead a healthy lifestyle. The play kitchen set has visual identity markers/ stickers to differentiate between different functions in the kitchen.